It has been a long time since I felt heat as oppressive as this past Saturday in the Lehigh Valley. The temperature reached close to 99 degrees with a heat index pushing 110. Not to mention the ultra-high humidity which left us feeling like we were wrapped in a steaming hot, wet blanket all day. It was a no-brainer to make a visit to Proper Brewing Company, another local gem located in historic Quakertown, PA. 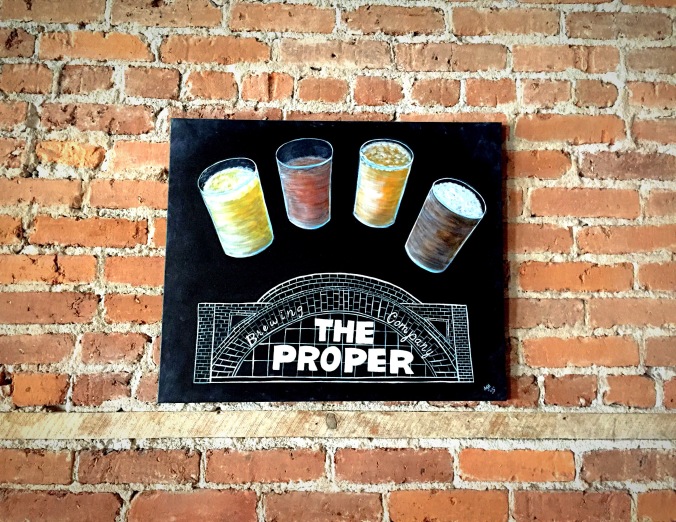 Proper is still in its very first year of business, having opened late November 2015. It is in the heart of downtown Quakertown, housed in a building steeped in history – the Palace Theater – which originally opened its doors as a silent movie theater back in the early 1920s. It was closed in 1950 and later housed the Dimmig Appliance store prior to its current use. The space offers Proper plenty of room for their craft operation as well as space for a large bar, tables, and full kitchen. It is run by couple Brian and Kris Wilson who have been Quakertown residents for over a decade.

Prior to moving to Hellertown, Mike and I spent two years as Quakertown residents ourselves. We were ecstatic when we first discovered Proper while attending McCoole’s Beer Fest in the spring of 2015. While they hadn’t yet opened their doors, Proper offered a few of their beers for sampling at the festival, which were already top-notch. When the brewery finally opened, we couldn’t wait to check it out.

Although we’ve been to Proper a number of times in the past, we were impressed on this most recent visit by some improvements to the atmosphere of the brewpub. As a former theater, the interior of the building is vast. With incredibly tall and wide walls and extra-high ceilings it would be easy for the brewery to feel stark and cavernous. However, the owners have hung photography featuring artwork by Steve Tobin, a local world-renown sculptor, as well as warm lighting for an inviting feel. The impressive air conditioning system was also fabulous with the melt-your-face-off humidity.

Since their opening, Proper has consistently offered a great collection of beers. Their IPAs and stouts have been the stand-outs each time we have visited. On Saturday, we both got a flight and sampled 8 varieties of their beer. The Cinema Citra IPA is incredibly balanced and refreshing and makes excellent use of the Citra hop, adding a zesty, fruity bitterness. It was a perfect pairing for a hot, humid day. Mike was also very impressed by the No-Name Stout, which is a chocolate malt stout that offers just the right touch of cocoa sweetness with a slightly hoppy, barley-focused finish. Despite not being too big on fruit beers, I was impressed by Your My Boy Blue, a limited release which features a Belgian-style witbier with a dose of blueberries. Although the blueberry flavor was present, it wasn’t overly sweet due to a bright, slightly tart and bitter finish.

In addition to beer, Proper offers a full food menu featuring classics like Bavarian soft pretzels with beer cheese (drooling), a variety of flat-breads (try the BBQ pork with bacon and slaw!), as well as burgers, sandwiches, and even desserts (stout float anyone?). They have also joined forces with some Bucks County wineries to offer a selection of wines and hard ciders. It appears that cocktails may also soon be on their menu – yet another reason to visit! We love the community-oriented approach of Proper – they are part of the Quakertown Revitalization Project, aimed at revamping the historic town center. They also value their connections with other local business and are active in featuring live music from local artists.

It has been exciting to see Proper grow from a table we visited at a local beer festival to a full-fledged beer and food operation. Visit Proper yourself for some excellent brews and to support a great local business in Quakertown.

Any breweries you’d like to see us review? Let us know in the comments! For another local gem, check out our review of Lost Tavern!