Get ready for another fantastic addition to the Lehigh Valley craft beer scene. Local brewer Jim Yergey is preparing to open the doors of Yergey Brewing on September 23rd, 2016, at the corner of 5th and Railroad Streets in Emmaus, Pennsylvania. Mike and I had the pleasure of visiting his brewing space and learning about Jim, his nano-brewery, and his distinctly personal and impressively delicious flight of beers.

Jim’s commitment to and enthusiasm for his craft were evident from the moment we shook hands. Although he does have an impressive beard, Jim is not your typical craft brewer. He brings to the table a doctorate in chemistry  and a 30-plus year career as a research chemist for Merck, resulting in a complex understanding of the brewing process on the molecular level. He guided Mike and me through his brewery with unbridled excitement, highlighting his Criveller brewhouse setup and pre-insulated ABS glycol system. He spoke of some of the challenges with adjusting from a small home-brewer’s system to a much larger nano-brewery set up, though you wouldn’t know it from the quality of his system and brews.

So, how did a retired chemistry PhD end up opening a nano-brewery in Emmaus, PA? “My wife is letting me do my thing!” he stated with a grin, pouring us samples of his Friend of the Devil (FOTD) Belgian Strong Ale. Jim is actually quite seasoned when it comes to brewing beer; he began home-brewing more than 20 years ago while living in Montreal. He noted that there was a dearth of beer varieties during that time, and he wanted to drink something richer than the run-of-the-mill options available. Jim continued improving his home-brewing skills until taking a brief hiatus while raising his children. However, once they became of drinking age, home-brewing soon became a family tradition.  Jim and his two sons would brew together every year between Christmas and New Year’s Day, creating more nuanced and flavorful varieties each time. Jim’s beers indeed reflect maturity and refinement – it is clear that he is no rookie to brewing. FOTD is excellent (Mike’s favorite!), with a nose of clove, a dark fruit flavor profile, and a punchy 9-9.5% ABV. Jim and his family eventually left Montreal and have now been living in Center Valley, PA for more than 17 years, making Emmaus an ideal location for Yergey Brewing.

Fast-forward to August 2014 when Jim decided to enter his Hoptileitious double IPA into the “Brewer For A Day” competition hosted by Fegley’s Brew Works. Hoptileitious won with flying colors, affording Jim the opportunity to brew his beer at Brew Works that winter and distribute it during Lehigh Valley Beer Week 2015. Hoptileitious was a big hit, selling out in just 45 minutes at Jim’s local haunt, the Limeport Inn. We weren’t surprised to hear this – the Hoptileitious offers an addictive balance of a malty middle and hops at the front and end. It would be a great IPA gateway beer for those expanding their palates to include more bitter varieties as well as an excellent option for those already into hoppier ales. The success of Hoptileitious set the wheels in motion for Yergey Brewing to move from dream to reality.

We also sampled Three Kings and a Wench, an Imperial Stout (my favorite!), which has that perfect creamy-yet-dry mouthfeel of a good stout and leaves with a lingering roasty taste, like a strong cup of coffee. It’s another heavy hitter at 9-9.5% ABV – I could see this one sneaking up on you. Be sure to ask Jim to tell you the story behind the name of Three Kings and a Wench – like all of his beers, it has quite a tale behind it! Finally, we tried the hot Chocolate (lowercase “h” version), a chocolate porter, which had a strong nose and taste of cocoa, though the sweetness wasn’t overpowering. The capital “H” Hot Chocolate will be in the works soon, which adds a homemade chili pepper extract to the chocolate porter for a spicy kick. Also upcoming are a Red IPA, Weisenbock, and a Session IPA made with all local ingredients. 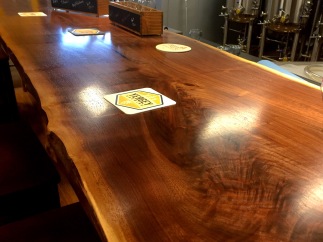 What is Jim’s biggest hope for Yergey Brewing? “I just want people to have fun and share stories,” he replied after a moment of thought. For Jim, it’s all about the interaction with his customers, the connection he has with other brewers and home-brewers in the region, and producing excellent beer that reflects not only his brewing skill but his connection with his family. Yergey Brewing is ultimately a personal reflection of Jim, from the recipes he developed with his sons, to the beautiful black walnut bar and table tops he constructed by hand. For Jim, that’s what brewing is all about.

We will be there for Yergey Brewing’s opening weekend and hope to see you there, too! Let us know what you think in the comments!