After years of drinking, researching, photographing, writing, and obsessing about craft beer, we have finally decided to brew some beer of our own. Looking back, we aren’t quite sure why it took us so long to take a stab at homebrewing. I remember some vague concerns about it being too sciencey, too expensive, too time-consuming, and a high chance of having to pretend to like 48 bottles of sub-par beer that we spent weeks brewing, all the while secretly wishing we had just bought some quality beer made by actual professionals. Despite our early hesitations, we somewhat impulsively decided to homebrew on a random Friday evening. 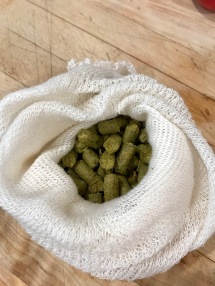 We made a quick trip to our local homebrewing store — Keystone Homebrew Supply — located in south Bethlehem, PA. For out of town readers, they also have a great online shop! The staff were incredibly helpful (and patient) with getting us set up with a starter kit, which included fermenting and bottling buckets, sanitizing powder, airlock, bottle capper, bottle caps, siphon, hydrometer, and bottle brush. At $65, it is a great set to get you going with the basics of homebrewing. We also picked up some liquid sanitizer, a couple cases of bottles, and our first ingredient kit. There are a few different complexity levels when it comes to homebrewing. The most basic are all-extract kits, which eliminate the need for adding hops and grains during the brew process, instead involving water and a pre-made extract that you simply pour into your boil pot.

The mid-range option is partial-extract brewing, which uses extract with the addition of fresh grains and hops, often providing a better flavor but with a bit more effort than the full-extract version. The most complex form of homebrewing is all-grain brewing, during which you don’t use any extract and make the beer entirely from scratch. Typically, all-grain brews have the best (and most versatile) flavor profile and are definitely cheaper than extract brewing, though they require a bit more effort and knowledge.

For our first brew, we grabbed one of Keystone’s partial-extract kits for a citra pale ale. It came with a set of straightforward directions and all the needed ingredients. They set us up with the fresh grains and hops, and a malt extract was included in the kit. Overall, the brewing process went smoothly, and before long our 5 gallons of pale ale was happily fermenting in the basement.

A week or two later, we bottled our first batch. Homebrews need time to further condition in the bottle prior to drinking to build up carbonation. After a long week of anticipation, we finally were able to drink our first homebrewed beer – the Perkwiler Pale Ale. We were pleasantly surprised with how it turned out — the hops gave it a nicely bright and bitter bite, and it had a clean finish. We wished it had a bit more fullness to the flavor profile — something that all-grain brewing will likely improve upon.

Since this first batch, we have continued to stick with partial-extract brewing as we continue to learn and tweak our methods. So far, we have also brewed a Belgian quadrupel, which is fermenting for a few more weeks as Belgians tend to have a longer fermentation period due to their higher sugar content. Most recently, we brewed and bottled a milk stout; it was supposed to be ready to drink this weekend but the low temperatures in the garage seems to have delayed the bottle conditioning. We’re giving that one a bit more time to build up carbonation before we try it out. We are also working on an experimental growler of wassail using our homebrewed pale ale with brown sugar and spices. It might be delicious, but it also might be terrible — that’s the fun of homebrewing!

On the whole, it has been incredibly fun and rewarding to practice homebrewing. It is an unreal feeling to get a buzz going from beer brewed in your own kitchen. As long as you’re up for a little bit of science-ing and with an open mind for experimentation, it can be an awesome hobby to pick up (and your family and friends will love you for it — if you end up sharing!). Here are some takeaways from our early forays into homebrewing: