Greetings! We had an amazing weekend due to the Lansdale Beer Tasting Festival in Lansdale, PA, this past Saturday afternoon. We went with a good friend of ours, Karen, who is also a beer aficionado. The afternoon began with a brief scare when I (Bethany),

This event is positively massive with over 150 breweries and close to 300 beers to sample. We attended this festival back in 2012 and had an awesome – but broiling hot – time. They stepped it up this year with a giant tent for more shade from the sun. 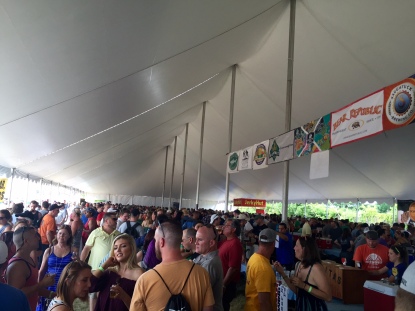 The beer selection was very impressive with a range of breweries and beers. Some heavy hitting highlights included Ballast Point (Sculpin for the win), Boulevard, Deschutes (Hop Slice, anyone? Were wishing for some Chainbreaker, though!), Evil Twin, Otter Creek (Mmmm Fresh Slice!), Firestone Walker (though we are still waiting for Wookie Jack to show up at a festival), New Belgium,Victory, and Ommegang (love me some Gnomegang!). There were also some notably good smaller breweries, some local to the area, including Conshohocken, Wiseacre, Brick by Brick, and 2SP.

The crowd was a fun mix of young and old, often bedecked with pretzel necklaces and beer-themed hats and shirts. We even found Waldo, chatted with numerous beer-fueled strangers, and deftly avoided making eye contact with a gentleman in polyester Halloween costume-esque lederhosen. There were frequent “woos” and an upbeat, party-like atmosphere with live music and flowing activity.

The tent was crowded but lines held rarely more than 1-2 people ahead of you. Porta-potties were clean (enough) and plentiful. No one seemed to overdo their drinking that we noticed, keeping the festival classy and comfortable.

What wasn’t so great? We immediately noticed a seemingly large number of dark beers. And not black IPAs or lagers. We’re talking heavy imperial stouts, chocolate porters, and other beers that seemed discordant with the brilliantly sunny, 90 degree June weather. We couldn’t bring ourselves to sample those more heavy offerings, opting instead for hoppy and thirst-quenching varieties. And really, we get it – what better way to get rid of your last remaining kegs of winter porter than a beer festival? But a 10% Russian Imperial Stout just doesn’t scream summer beer fest for us.

All in all? A great festival with an impressive beer selection, fun crowd, and lively atmosphere. We are already excited to see what Lansdale has in store for next year!

Hey, there! Welcome to our blog, Two Pints, Please! We are thrilled to have an online forum to share our adventures in the world of beer. Our musings will offer a hoppy twist on your typical travel blog, including brewery and brewpub reviews, the lowdown on beer festivals, beer samplings and recommendations, and adventures in eating and drinking right at home. Thanks for stopping by for a visit. Cheers!