As promised, we have two more breweries to review from our Finger Lakes trip. We already reviewed one of our favorites, a couple of relative newcomers, and two other Finger Lakes standouts.

For beer adventurers like ourselves, we recommend that you try everything and seek out all of the local breweries in the Finger Lakes and taste everything you can. But if you only have a limited amount of time or if you are not so obsessive about drinking everything in sight as I am, I recommend that you make a visit to these two a priority.

Keuka Brewing seems to be a pretty popular place along the trail which makes sense considering that they did win an award for best craft brewery in NY state for 2014, which is a pretty high honor in a state that includes Southern Tier and Ommegang. They also won a regional award for their Mocha Imperial stout. I know all of this because I blatantly plagiarized all of these facts from their website which you can visit here.

Keuka brews one of the finest double IPA’s that can be found in the Finger Lakes, the Alpha Predator Double IPA was very impressive for a small local brewery! The balance and the drinkability were on par with any other high quality brewery in the country. It has a high ABV at 9.6% but still has a great hoppy punch at 86 IBUs. It is not too malty and sweet as many other double IPAs can be. The New Zealand hops were really allowed to shine, giving this a crisp bright flavor. I have had a lot of double IPA’s and this one is definitely a winner. 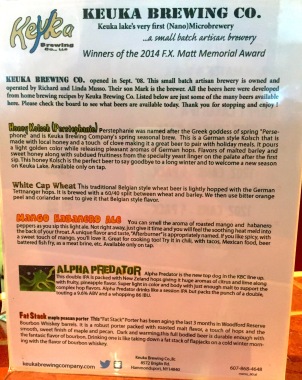 One of the more interesting selections on tap was the aptly named Afterburner Habañero Ale; a fairly light ale brewed with habañero peppers. I have had this style of beer before and I am not a huge fan so it is really not fair at all for me to review it. Sorry Keuka. I love spicy food and don’t mind sweating and panting when I eat wings but when you drink spicy it seems to hit you in the back of the throat and not on your palette. But in fairness, what we love about touring breweries is seeing all of the creativity and unique takes on different beer styles, so we love that Keuka is going outside of the box and playing with different flavors and ingredients. So, if you like spicy beers than I am sure that you will like this one, but if you are like me, stick with the awesome Alpha Predator.

Besides those two beers Keuka does have a nice selection of other ales, lagers, IPA’s, and the aforementioned, award winning mocha imperial stout which I did not get a chance to try. They have a fun outdoor seating area with some games, umbrellas, and space to set up your own lawn chair and enjoy a growler. 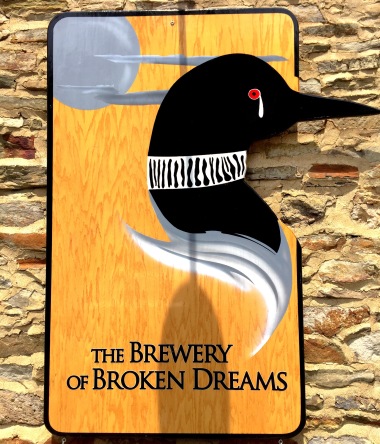 So sad, but so good.

The Brewery of Broken Dreams

The Brewery of Broken dreams was another standout on our Finger Lakes trip that really impressed us. They are a newer brewery that opened about a year and a half ago. The name stems from the owners’ long sought after dream of opening their own brewery and all of the heartache they endured before their dream finally became a reality. 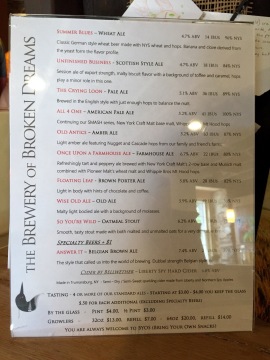 Depressing names aside, we are glad that their journey was a long one because it seems that those obstacles and delays gave them time to truly refine their craft. Brewing is like anything else in that it takes time to perfect. As a former chef, I have made the same dishes hundreds of times and I continue to tweak processes and ingredients every time to continually improve the final product. For a newer brewery, The Brewery of Broken Dreams has a very well refined product that tastes like it has been tweaked as much as my world famous hot wings. (not really, but they’re pretty good)

I really enjoyed each and every one of their beers. They were well-balanced and drinkable but still very unique and flavorful.

I loved the Wise Old Ale, partially because I have never had an old ale before and I have a curious desire to taste everything that exists as my waist will confirm. Beer Advocate, being the wealth of beer knowledge that it is, says that old ales are, “low attenuated beers with high levels of dextrins.” I have no idea what any of that means but I can assure you that it tastes way better than it sounds.

Besides the old ale, they had a number of other beers on tap that were just as good as the next. The taproom is in a historic building that was once a wine cellar and its design and style are as refined as the beer itself. I highly recommend stopping here if you are going to be in the area.

If you have visited the Brewery of Broken Dreams or Keuka Brewing Company and have stories to share or beers to rate, we would love to hear from you!