Bob Ross would call that a happy little nugget.

It is Monday evening and naturally I am drinking beer and writing about it. Tough life. Tonight’s brew is   new Flying Dog beer, the Nugget Imperial IPA. This is an offering from Flying Dog’s Single Hop Series where they are showcasing just one type of hop in each beer.

Nugget hops seem super popular these days for their pleasing bitterness and floral aroma. I smoke cigars so I couldn’t tell you much about the aroma. I had to ask Bethany to sniff my beer and tell me about it so I could properly review it. She said, “It smells like beer.” I guess I will take her word for it.

What I can tell you is that the beer pours a light amber with a moderate amount of head. As you might imagine the nugget hops really stand out in this beer. 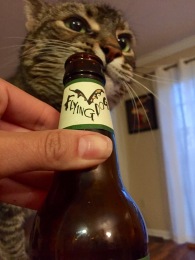 “This has a crisp meowthfeel.”

It has a clean, crisp flavor with the citrus and floral notes of the nugget hop followed by that familiar bitter punch. If you are looking for a light, refreshing beer to sip on the beach on a hot, sunny afternoon this one may not be for you. But if you love clean hops then you will definitely like this beer.

You would be hard-pressed to find another craft brewery in the United States that better embraces the rich Belgian brewing tradition more than Brewery Ommegang located just outside of Cooperstown, NY. The brewery is nestled comfortably in the foothills of the Catskills Mountains on a 136 acre former hop farm with an impressive entryway styled after a Belgian farmhouse. 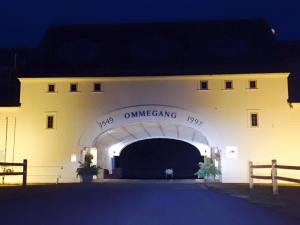 I have long been a huge Ommegang fan for its Three Philosophers quadruple, the Hennepin Saison, and the Gnomegang Blonde ale. So, I was very excited to try more of the limited release beers that I have been seeing pop up at our local bottle shops.

This weekend I sampled the Soothsayer Belgian-style Dark Ale. This might quickly become a new favorite Ommagang beer for me, though it would be next to impossible to unseat the bourbon barrel-aged release of the Three Philosophers that we discovered at the brewery this spring. The Soothsayer definitely has all of the characteristics of a strong dark ale but the brewery omitted the spice for this particular offering.

Soothsayer on the Deck

Although I love Belgian beers I find that the spice can sometimes be overdone, particularly when this style is attempted by American craft breweries. However, Ommegang has truly refined their art and the resulting Soothsayer is a very smooth, malty, and drinkable beer with all of those familiar, distinctive Belgian characteristics without the spice.

It pours very dark brown, almost black, and is brewed with a variety of malts, Spalter Select and Styrian Golding hops, and Ommegang’s signature house yeast. It packs a punch with an ABV of 8.9% but without the alcohol-forward taste. Ommegang advertises tasting notes of coffee and chocolate and suggests pairing with a rich cheese or dark fruit desserts.  I enjoyed mine with a deck, a cigar, and a quiet, sunny Saturday afternoon which I thought was the perfect pairing.

Check it out here: http://www.ommegang.com/blog/meet-soothsayer/ 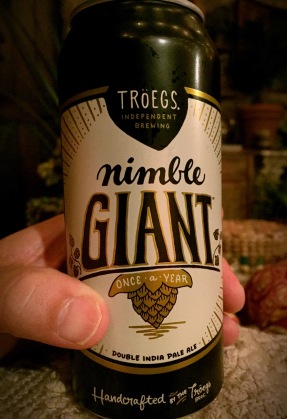 Giant can for the Giant Nimble

Cue the sounds of angels singing — it’s time to talk about Tröegs Nimble Giant. We were thrilled to be able to get our hands on the few remaining cases of this elusive once-per-year small-batch scratch beer at our local beer shop. Tröegs is one of our favorite breweries, and we are lucky to live only an hour and a half away from their brewery in Hershey, PA.

Nimble Giant is a double IPA doused with a fabulous blend of Azacca, Mosaic, and Simcoe hops. The flavor is impressive – well-balanced (or nimble, if you will), rich, and incredibly drinkable. The hops are definitely there, but they lack that punch-in-the-mouth bitterness that many double IPAs have. Rather, the heavy dose of hops packs in 69 IBUs with a smooth, malty backbone for ultimate drinkability.

Mike tends to be a bit more favorable with double IPAs, while I tend to go more for regular IPAs and pale ales. However, we found a shared lust for the Nimble Giant that was enjoyable for us both. The Giant comes in large cans with a jazzy design that go down faster than you even realize. Two beers in and I was already calling it “Giant Nipple.” 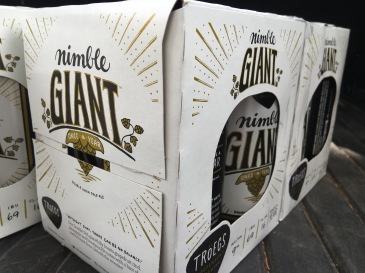 Caution: Beer on Board!

We hope you can track down a case of your own and enjoy with us one of the best double IPAs we’ve ever had.

I was excited to see this new collaboration pack at our local beer store. This pack features the classic Fat Tire as well as collaborations between New Belgium and five other breweries.

We have been long-time fans of Allagash, Firestone Walker, and Avery, and we were excited to try Hopworks and Rhinegeist, which were new to us. The packaging and beer labels are bright, fun, and clever with the different bicycle variations on each bottle. Here’s the breakdown:

All in all, this was a fun sampler pack! I’d recommend grabbing one to try them out yourself. The Fat Hoppy Ale was a big favorite out of the pack – would be great to see more of that in the future!